June 16, 2018. Roll the ball in the Kazan Arena. France faces Australia on the first day of their group in the 2018 World Cup. The Gauls arrive as one of the great favorites to win the trophy, while the Australians defend themselves as best they can against the French onslaught.

60th minute of the match. Griezmann falls in the area. The game stops. The referee goes to the VAR (Video Assistant Referee). After the review on the screen, he signals a penalty for France. The Atletico de Madrid player at the time scores. The match ends with a 2 to 1 in favor of ‘Les Bleus’. The play, in the end, goes down in history for being the first in football history where the technology known as VAR was used.

The history of VAR is relatively short. The new technological system began to take shape in 2016, when it was approved by the International Football Association Board (IFAB), which is the institution in charge of football rules. Once approved, a two-year system improvement and trial period was granted. Since 2018 it was authorized by FIFA for its use in the Russian World Cup, and the VAR was consolidated. However, along the way he was tested in numerous leagues and competitions, not without generating controversy. One of the most outstanding was the 2017 Club World Cup.

The Video Refereeing system is limited to intervene in four specific actions: penalties, goals, red cards and a possible identity confusion while cautioning a player. If one of this mentioned incidents occurs during the match, a protocol consisting of a few steps is activated.

Either the referee or the video assistants those who notify their intention to review a certain incident, they must act quickly. Thus, if someone want to review an action, it must be done once the play is over, and never after the game is resumed.

The video assistants are located in the VAR booth, known as the VOR (Video Operation Room). This booth is made up of a main referee, called by the name of VAR, accompanied by his usual assistants, known as AVAR. The number of members that make up this booth can change their number depending on one competition or another. In Spain, normally, the cabin will be composed of a VAR and an AVAR. 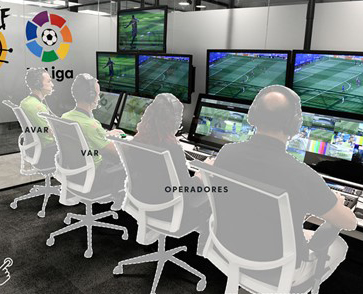 As mentioned, the starting point and consolidation of VAR was in the 2018 World Cup in Russia, the last played. Curiosly, it ended with a French victory, precisely the first to be benefited by the novel during the World Cup.

But the France vs Australia match was not the only one in which VAR was the protagonist, as well as decisive.

On June 18, Sweden began its path in the World Cup. His first rival was South Korea, which had its main player in Son. In the 62nd minute of the game – with 0 to 0 on the scoreboard – a South Korean player fouled a rival in the area. The referee does not whistle anything, and the game continues. But from the VOR room he receives the instruction to review the action. The referee goes to the monitor and signals a penalty. Sweden does not miss and scores it. The match ends with the solitaire 1 to 0.

The second game of the Spanish team in the group stage was against the Iranian team. The Spanish started as favorites in a match that would hold their future in the World Cup. The ‘red’ went ahead on the scoreboard.

In the second half, the Iranians would manage to tie, but little doubt his joy. The official put his hand over his ear. From the VOR room they were pointing something to him. After a few minutes of enquiry, the referee, hand up, whistled forward position. Offside and goal disallowed. The prevailing 1-0 would stay until the end of the game.

The decisive match of the Spanish luck in the 2018 World Cup would also be marked by technological intervention. In the absence of a few minutes for the end of the game, Morocco rose with a short victory by 2 to 1. The Spanish team was against the ropes and their pass to the second round was in danger, depending on the result of their match and Portugal – Iran. In the 92nd minute, Iago Aspas sent the ball to the back of the net. The linesman raised the flag and the goal was canceled, pending review. After an enqiry with the VAR, the goal was considered valid. Spain celebrated and sealed its pass to the second round.

Russia 2018 was the definitive field of experiments and the dawn of the new football that was here to stay. After Russia, the major leagues began to introduce technology to their football. Among others, the Spanish LaLiga in the 2018-19 season.

VAR was the protagonist in more situations during the World Cup. Some decisive situations; others, not so much. Although, the legacy of the World Cup in Russia in football history went further. It was the establishment of technology in football. It was one more step towards the disappearance of a football that will not return, a step towards the renowned modern football. It was the establishment of VAR in the sport.

At first sight, the term augmented reality may be conceived as innovative and new, but we can actually trace it back to the past century, even though it wasn’t known with the same name and Leer más…