Movies that every football fan should watch

Football can’t be defined as a simple sport. Its global reach has meant that it has transcended this original concept to become part of what is usually defined as mass culture. And, as an integral part of this concept, its tentacles have been extended to other media such as literature, music or, in the case we are dealing now, cinema.

However, long before it reached the dimension it has today, this sport was already serving as an inspiration for filmmakers. In fact, the first Spanish sound film in history is considered to be “Football, love and bulls”, directed by Florian Rey and released on 07 January 1930.

That year, Athletic de Bilbao would win the Spanish First Division, in which only 10 teams were playing and which had formerly illustrious teams such as Real Union Club de Irun, Arenas Club de Guecho or C.D. Europa. However, the plot of the film is triggered when the fictitious goalkeeper of Triana FC fails miserably in a match against Real Madrid, which leads him to prove himself (unsuccessfully) in bullfighting with the intention of conquering his beloved and her father, who does not accept a footballer as his son-in-law.

The film, of which no copies have been preserved, shows that the vision of the world of football has changed a lot since then, and cinema is no exception when it comes to reflecting this new reality. That’s why we wanted to make a selection of films about football, all of them released in the 21st century, which every football lover should see.

We begin with the only film in this list that narrates a real history, although it has certain fiction elements: the one known as “Miracle of Bern”, that names the film and meant one of the biggest surprises in the World Cup history. 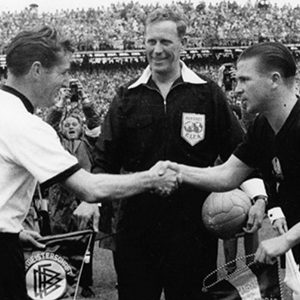 Suffering a deep crisis after losing the World War II and with the country and its capital split into two, it was a surprised for the football world that the Federal Republic of Germany earned a place in the final of the World Cup organised by Switzerland in 1954. And even more that the fourth of July the outsiders won the title against the great favourite: Hungary, leaded by Ferenc Puskás, Zoltán Czibor or Sándor Kocsis, among other excellent players. If we add to the mix the fact that in the eight minute of the final Magyars were already won 0-2, we will have the perfect ingredients for an epic film.

West Germany got back in the game and, beyond every other player, Helmut Rahn turned into the hero of the final after scoring two of the three goals of his national team. Der Boss, as he was called in his country, is precisely the main character of the film The miracle of Bern.

Suffering a deep crisis after losing the World War II and with the country and its capital split into two, it was a surprised for the football world that the Federal Republic of Germany earned a place in the final of the World Cup organised by Switzerland in 1954. And even more that the fourth of July the outsiders won the title against the great favourite: Hungary, leaded by Ferenc Puskás, Zoltán Czibor or Sándor Kocsis, among other excellent players. If we add to the mix the fact that in the eight minute of the final Magyars were already won 0-2, we will have the perfect ingredients for an epic film.

West Germany got back in the game and, beyond every other player, Helmut Rahn turned into the hero of the final after scoring two of the three goals of his national team. Der Boss, as he was called in his country, is precisely the main character of the film The miracle of Bern. 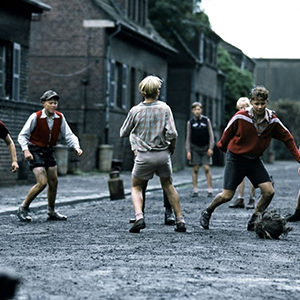 Matthias is a boy that grows up without his father, Richard, a Soviet Union war prisoner. However, he relies on another father figure: the footballer Helmut Rahn, who takes the child under his wings. Nevertheless, shortly before the competition, Matthias’ father returns troubled by his captivity. The boy’s passion for the event contrasts with his father’s apathy, but Germany’s victory will serve to restore Richard’s zest for life. 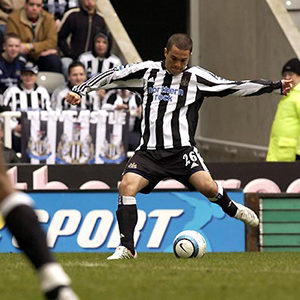 The first film of the saga was released in 2005. Goal!, directed by Danny Cannon, tells the beginning of the adventure of Santiago Muñez (Kuno Becker), a Mexican boy who lives unlawfully with his family in the United States hoping to be a footballer. As he grows up, he starts giving up his dream until the day a former English footballer see his abilities with the ball. He promises Santiago that if he travels to England (leaving his family without the opportunity to return), he will put Santiago in touch with one of his former Premier League teams: Newcastle United.

This is the first film of a trilogy about the value of the dreams and the withdrawals that implies being a professional footballer. The next films of the saga are Goal II: Living the Dream, directed by Jaume Collet-Serra (2007), and Goal III: Taking on the World, directed by Andrew Morathan (2009). The latest film also includes cameos of the well-known referees Horacio Elizondo, Frank De Bleeckere and Massimo Busacca

La Romareda, 1996. Zaragoza and Barcelona play a match that will go down in history for a play in which the assistant referee Rafa Guerrero calls the principal referee, Mejuto González, to warn him that there has been a penalty and expulsion in favour of the visiting team. In that moment, Mejuto will release a phrase that will remain in the memory of Spanish football fans: «Rafa, don’t fuck with me». 24 years later, it is still reminded to the protagonists. As an anecdote it can be said that the true words weren´t those, but “Come on, fuck Rafa, I shit on my mother, expulsion of who?», although that words are never going to change in the collective imagination. 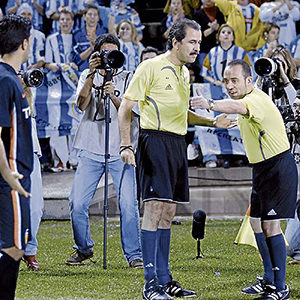 That phrase is the basis for the comedy Salir pitando, directed by Álvaro Fernández Armero, which was released 11 years after the aforementioned event. In the film, José Luis Pérez is a referee of LaLiga who, despite being considered one of the best referees in the past, is going through many personal and professional problems that are making him the most hated referee by the fans.

In spite of these conditions, he decides to referee the match Recreativo de Huelva – Valencia in the last fixture of the competition that can decide the championship for the visiting team. And he will do it accompanied by his inseparable assistant referee and friend Rafa (Javier Gutiérrez), a name that will be used by José Luis Pérez to paraphrase Mejuto González.

As a curiosity, it is worth mentioning that some scenes of the film were shot in the Nuevo Colombino stadium during a real Spanish LaLiga match between Recreativo de Huelva and Valencia FC.

Imagine, for a moment, that before the final of a major European competition the referee is caught taking a bribe to rig the result of the match. And, as a punishment, he is sent to referee the worst team in the Italian third division. Awesome, isn’t it? 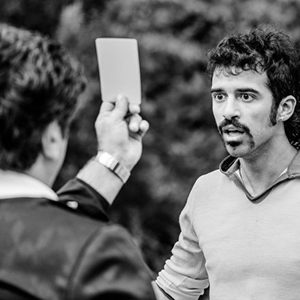 This is what L’arbitro proposes, a grotesque comedy directed by Paolo Zucca based on his short film of the same name which won the David de Donatello in 2009, the most prestigious award in Italian cinema. Cruciani (Stefano Accorsi) goes from refereeing finals on the best stages of the European continent to referee on the fields of land where he had never expected to return, receiving insults without the parapet offered by the remoteness and deafening noise of a big stadium.

Filmed in black and white, film director confessed to having been inspired by several real cases to build his story. Byron Moreno, a former international referee who is widely remembered in Italy for his controversial performance in the round of 16 of the 2002 FIFA World Cup hosted by Korea and Japan, or the hearings of the “Calciopoli”, a scandal that affected several teams in the Serie A, served Zucca to build his story “forgetting the names and facts, keeping the way of speaking”.

“If I had to put music in the background of my life, it would be the broadcast of football games”. This phrase perfectly defines its author, the deceased Argentinean writer and cartoonist Roberto Fontanarrosa, and explains that his passion for this sport flooded a good part of his stories. 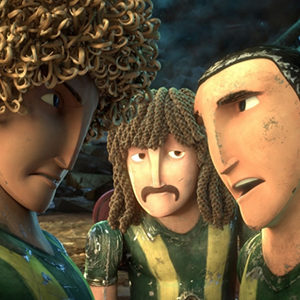 One of them is Memoirs of a Right Wing, which served as the seed for the script of Underdogs (The Unbeatables in the UK), which become the milestone of being the first Argentinean 3D animated film. Directed by Juan Jose Campanella (The secret in their eyes), it follows in the footsteps of Jake, a shy boy who will have to face Ace, considered the best football player in the world but who still has to avenge the only defeat he has ever suffered in his life: when he was a child, Jake beat him in a table football match.

However, the protagonist will have an invaluable and unexpected support when he discovers that table football players have a life of their own and they will help him to defeat his opponent again.

VAR: how does it function and in what circumstances can be used?

From Thermography to VAR: Technology applied to sport

Do you want to accompany us in this new adventure?

Andres Montes, one of the greatest sports broadcasters in Spain, told in one of his most emblematic sentences that “life could be wonderful”. However, the relevant part wasn´t what he said or how he did Leer más…